On the occasion of Mahatma Gandhi’s 153rd birthday on Sunday, his life will be depicted in a number of films, acknowledging that his ideas and philosophy are still alive and that cinema has in some ways promoted them.

In honor of Gandhi Jayanti, here is a look back at some of the actors who have portrayed the Father of the Nation on film.

The 1982 film Gandhi, starring Ben Kingsley in a role for which he won an Academy Award, is widely regarded as the definitive biopic of the Mahatma. From South Africa to India, where he would become a mass leader and eventually lead the nonviolent, noncooperative Independence movement against the British, Gandhi’s life was chronicled on film.

Interestingly, Naseeruddin Shah also tried out for this part, but Kingsley ultimately won it thanks to his extensive preparation, which included reading more than 28 books on Gandhi, drastically reducing his weight, and mastering an authentic Indian accent. 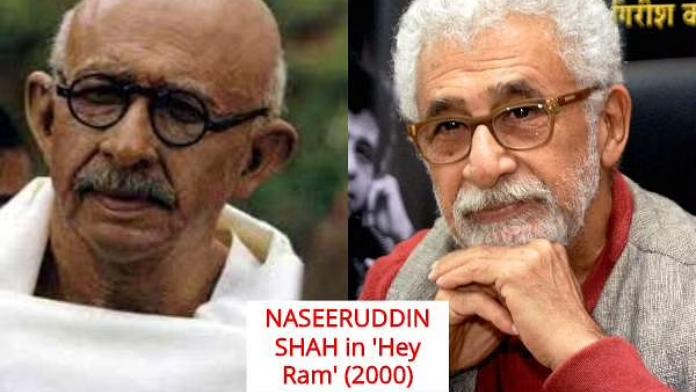 The veteran actor Naseeruddin Shah portrayed Mahatma Gandhi in the Kamal Haasan-directed film “Hey Ram” (2000), which explored the pointlessness of violence and hatred. The brief appearance was powerful because it demonstrated the importance of building trust among communities experiencing a crisis of faith and the futility of resorting to violence to achieve positive change in individuals’ lives.

A quote from “The Making of the Mahatma” by Rajit Kapur: This 1996 Shyam Benegal film starred Rajit Kapur as Gandhi during the 21 formative years he spent in South Africa, years that helped mold him into the kind of leader who would influence the likes of Nelson Mandela and Martin Luther King Jr.

Rajit Kapur won a National Award for his film “The Making of the Mahatma,” which was adapted from Fatima Meer’s book “The Apprenticeship of a Mahatma.” Chirag Vohra plays Gandhi in a unique way in the Zee Theatre teleplay Shobhayatra. The play, by Shafaat Khan, explores the fading of the ideals that led to our country’s independence. Some people are shown eagerly dressing up as historical figures like Gandhi, Subhash Chandra Bose, Bal Gangadhar Tilak, Jawaharlal Nehru, Rani Laxmibai, and Babu Genu for the sake of joining a “Shobhayatra,” but they don’t actually believe in their ideals.

In the play, Chirag plays Gandhi, and his most memorable line is “Manav Jaati Ek Nirnayak Mod Par Aa Pahunchi Hai” (The human race has reached a decisive moment), which stresses the need for a return to traditional virtues like nonviolence, honesty, truth, and courage.

In celebration of Gandhi Jayanti, the film “Shobhayatra,” shot by Attar Singh Saini and directed for the stage by Ganesh Yadav, will be broadcast on Airtel Theatre, Dish TV, and D2H Rangmanch.

Also Read: Teaser and Poster of Prabhas Starrer Adipurush to Release in October 2022!

A line from “Lage Raho Munna Bhai” starring Dilip Prabhavalkar, in the role of Gandhi, won over the hearts of millions of moviegoers with his affable, witty performance in this Raju Hirani film from 2006. Sanjay Dutt starred in a comedic film that portrayed the Gandhian tenets of truthfulness, honesty, humanism, and nonviolence as a panacea for all of life’s ills.

When a thug starts to recognize Gandhi in everyone he meets, it marks a turning point in the film that has an impact on more than just the protagonist. Four National Film Awards were given to the movie.