The song’s artwork was provided by Jasmin Bhasin, who will make her debut in the Punjabi film industry with a film honeymoon alongside major star Gippy Grewal. Yes, the release date of the first song from Honeymoon has been announced after the first look motion poster was made available.

The song’s title, “Jhaanjar,” and its accompanying music and text give the impression that it is a catchy and calming tune that you can dedicate to your loved ones. Je Yaar Ni Banauna Goriye, Mainu Jhaanjar Bana Le Pair Di!, Jasmin penned. The 30th of September (tomorrow) will be the official release date for the song.

Even a teaser for it has been released. As an added bonus, the visuals and score are excellent. B Praak not only sings on the track, but he also composed and produced the music for it. This was a love song, and we witnessed the blossoming romance between Gippy and Jasmin.

All we need now is for them to have some chemistry and the drama to really kick in. The song’s lyrics were written by Jaani. Speaking of movies, Amarpreet G S Chhabra’s Honeymoon is scheduled for release on October 25, 2022. Many people have been waiting for them to team together for this romantic comedy since it was first announced. 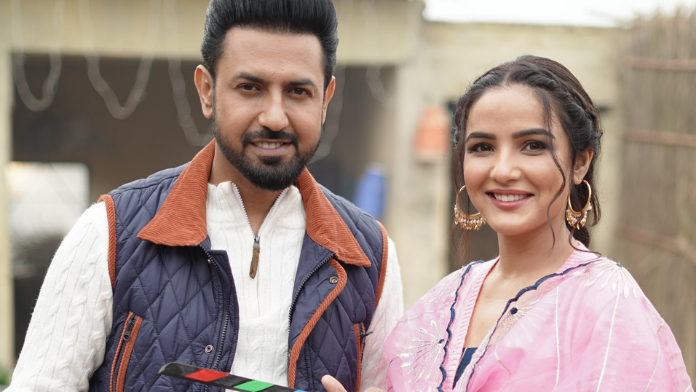 Naresh Kathooria penned the film’s script. The movie’s charming romance scenes and amusing comedies get the audience excited to see the Diwali spectacle. Production on the film began in January of 2022, and the Punjabi schedule became a hot topic of conversation in the internet sphere.