Six years had passed in Westeros, and in the most recent episode of “House of the Dragon,” what began as a routine question of estate law quickly escalated into a crisis that threatened to bring the entire kingdom to its knees. Fortunately, that means it’s time for another emotional family reunion, even if the predominant feelings are distrust, dread, and rage.

Despite the mayhem, there is still cause for optimism about the possibility of peace among the feuding parties. Once again, it’s our optimism that becomes fatal. This week, we open behind the Driftwood throne, where Rhaenys (Eve Best) sits. Corlys (Steven Toussaint), her husband, has been abroad on a voyage since the death of their children, and he was recently attacked by pirates while on his way home.

Since his brother Vaemond (Will Johnson) claims his seat on the grounds that, in his opinion, Rhaenys and Corlys’ son Laenor left no real born successor, the matter of his succession (a name that this show arguably deserves more than the other one at this point) emerges.

Every Dragon in Game of Thrones: House of the Dragon

Fired upon! Once again, Rhaenyra’s (Emma D’Arcy) older children’s paternity is questioned. Vaemond assures him that he will deliver the king’s request to Queen Alicent (Olivia Cooke) and the Hand (Lord Otto Hightower), the true rulers of the land (Rhys Ifans). They have no motive to support Rhaenyra or her sons’ claims while King Viserys (Paddy Considine) is sick. To face this challenge, Rhaenyra and her husband Daemon (Matt Smith) hastily travel to King’s Landing, where we witness yet another family get-together that devolves into accusations, acrimony, and a near-brawl. This week’s director, Geeta V. Patel, has a lot working against her, but she makes the most of her situation.

After what must be an eon, we finally get a brief glimpse at how the various offshoots of the family tree have developed. It appears that Rhaenys is successfully managing Driftmark and bringing up Baela, Daemon’s daughter (Shani Smethurst). Rhaenyra and Daemon are content on Dragonstone as well; she is teaching her son Jacaerys (Harry Collett) High Valyrian, and she is expecting their third child together after Daemon fathered identical twins, Aegon and Viserys.

By the looks of things, Daemon himself spends his time climbing around in pursuit of dragon eggs. Things aren’t as bright in King’s Landing. Viserys is quickly going down, and he needs milk of the poppy, or opium, to dull the constant agony he endures. Alicent divides her time between taking care of him, co-ruling the country with her father, and worshiping the Seven, whose seven-pointed star can be seen displayed prominently around the palace. 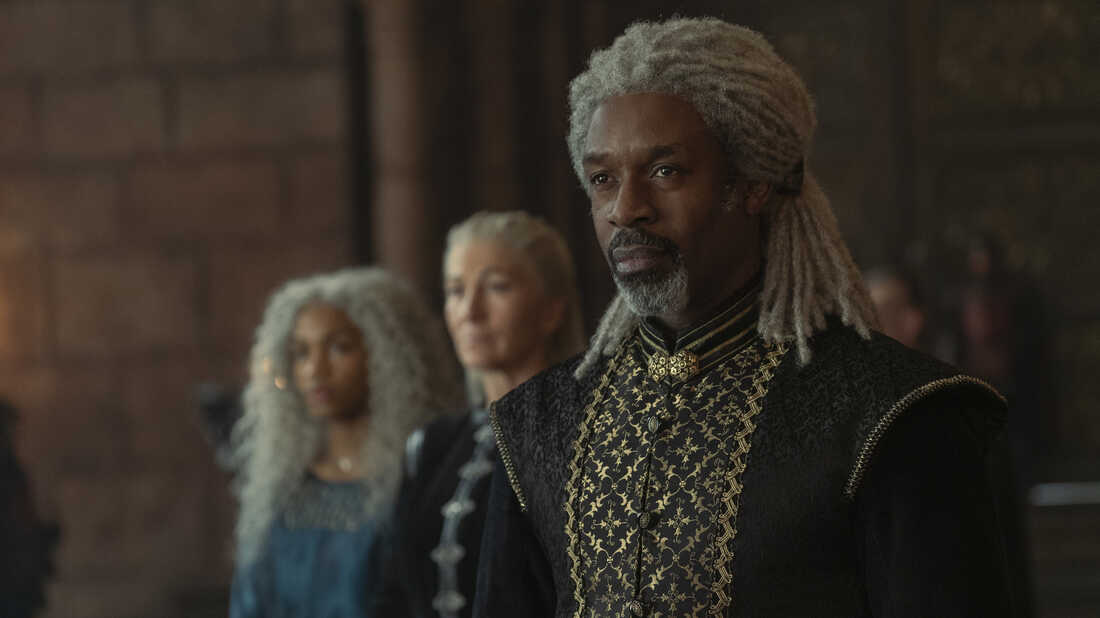 She also needs to make time to comfort the women who were raped by her son Aegon (Ty Tennant). What a handsome prince. The scene in which Alicent meets Dyana (Maddie Evans), a rape survivor, provides further evidence of the way power dynamics have distorted her personality. Her expression betrays genuine concern for the youngster, but her reaction is taken directly from the #MeToo playbook of facilitation.

She uses tried and true lines like “I trust you but I worry that others won’t” and reminds the poor girl that it’s the prince’s word against hers before handing over cash and what amounts to an abortion pill in the morning. After that, she makes what seems to be a real effort to pull Aegon back in line, but her words fall on the arrogant, deaf ears of a man who doesn’t seem to recall the episode she’s referring to.

Although he claims to be making an attempt, there is no evidence of this beyond his obedient marriage to his backward sister, Helaena (Phia Saban). Unfortunately, incest is not without its drawbacks. Thus, Rhaenyra, Daemon, and their family arrive in a highly precarious circumstance. Although Rhaenys doesn’t think she’ll have much luck convincing them to aid her, she still has cause to suspect that one of them is responsible for the death of her son Laenor, who is probably still enjoying life on the high seas. 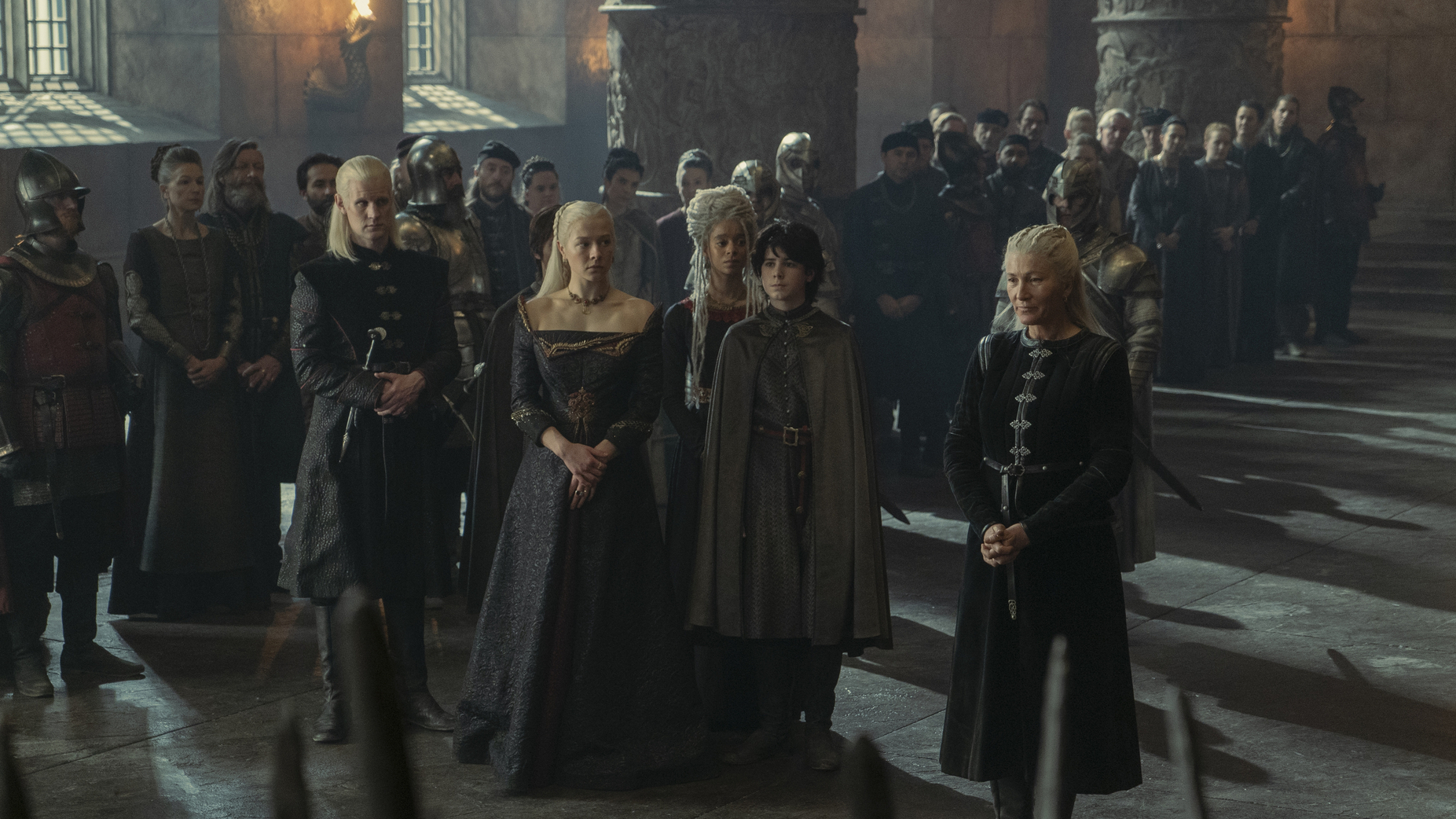 Although Rhaenys is initially skeptical by Rhaenyra’s proposal to wed her sons to Rhaenys’ granddaughters so that the father of both brides and stepfather of both grooms would be the same, the proposal eventually wins him over. After Rhaenyra begs her father to defend her, Viserys hobbles, Yoda-like, from his bed and interrupts Vaemond’s cocky claim of victory.

Vaemond, encouraged by a whisper from Daemon, harshly criticizes the three guys and labels Rhaenyra a whore. Pandemonium! At least, until Daemon slashed Vaemond’s head clean off and the conversation ended. Some broad observations about the situation: Rhaenyra’s pleading with her father over the throne reveals that she is trying to come to terms with the danger she is in, which has not always been clear; nonetheless.

she continues to rely on the male members of her family for support rather than establishing her own, more widespread power base. The events in Fire and Blood by George R.R. Martin differ in that Rhaenyra is not said to have ordered Daemon to kill Vaemond and silence anybody else in the family who supported Vaemond’s story. The program is clearly picking a side and establishing a more distinct good man and evil guy dynamic. 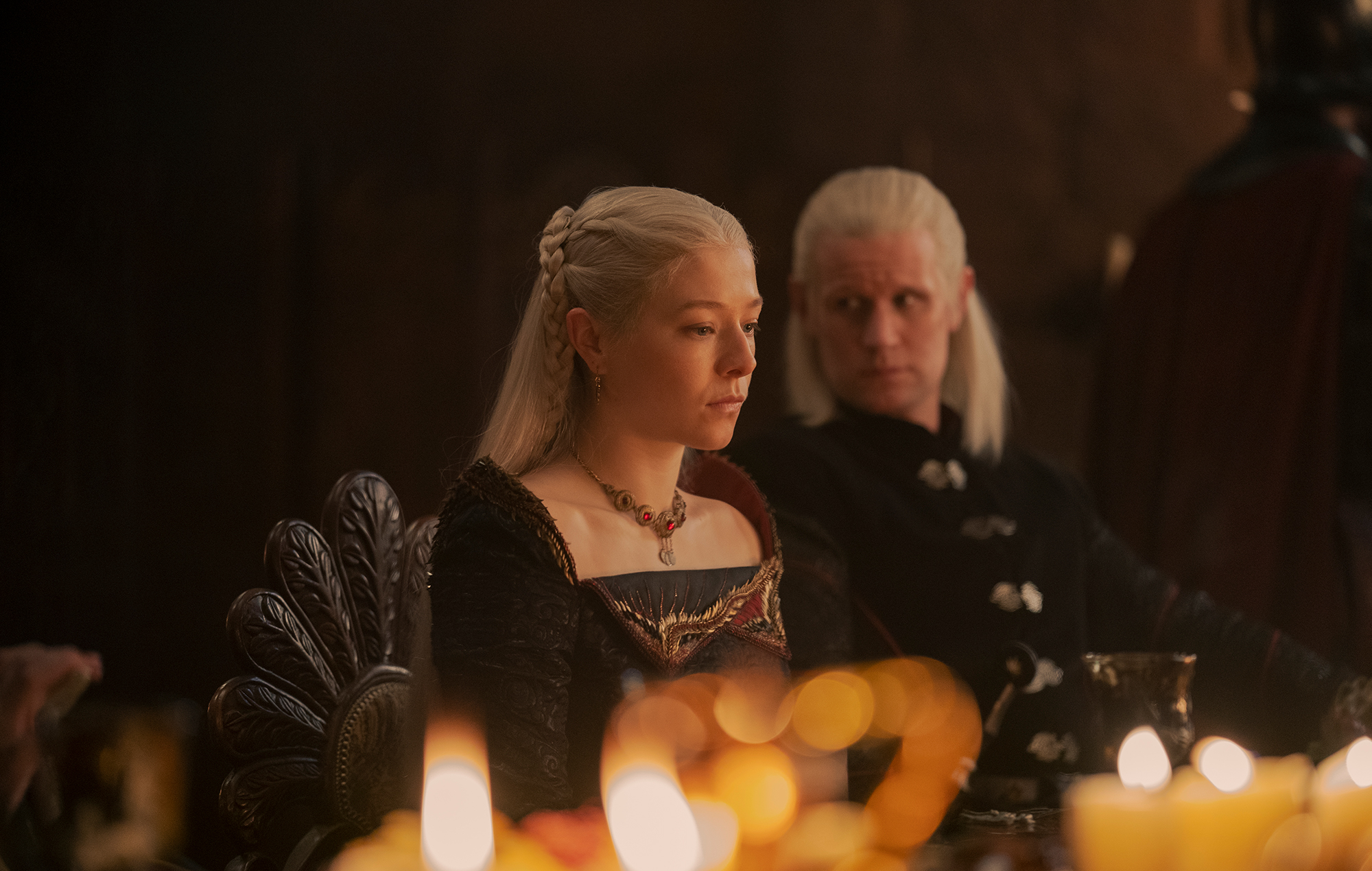 Raymond is correct in what he says, and his assertion recalls the debate between Rhaenys and Corlys the last time around over which is more important for a legacy: a prestigious name or pure blood. Maybe that’s why Rhaenys is standing over Vaemond’s body as the Silent Sisters get ready to bury him. Or maybe she’s planning something less amicable than her apparent support of Rhaenyra.

Every IGN Game of Thrones Review

Not to be outdone, the vile Aemond Targaryen (Ewan Mitchell) has matured into a serpent-fast swordsman capable of defeating Ser Cristen (Fabien Frankel) and a hilariously sinister bastard, with a sort of evil Legolas look that makes him like an assassin from a cheap fantasy novel. As he stares at his uncle Daemon intently with his one good eye, it’s evident that he wants to challenge him.

However, his most devastating blow doesn’t come until the family supper that follows the presentation of Vaemond’s petition. Viserys laments that the crown cannot stand strong if the House of the Dragon continues divided and expresses a desire for his family to reconcile their differences. “Put aside your differences, if not for the sake of the throne, then at least for the sake of this elderly guy who loves you all so very much.” 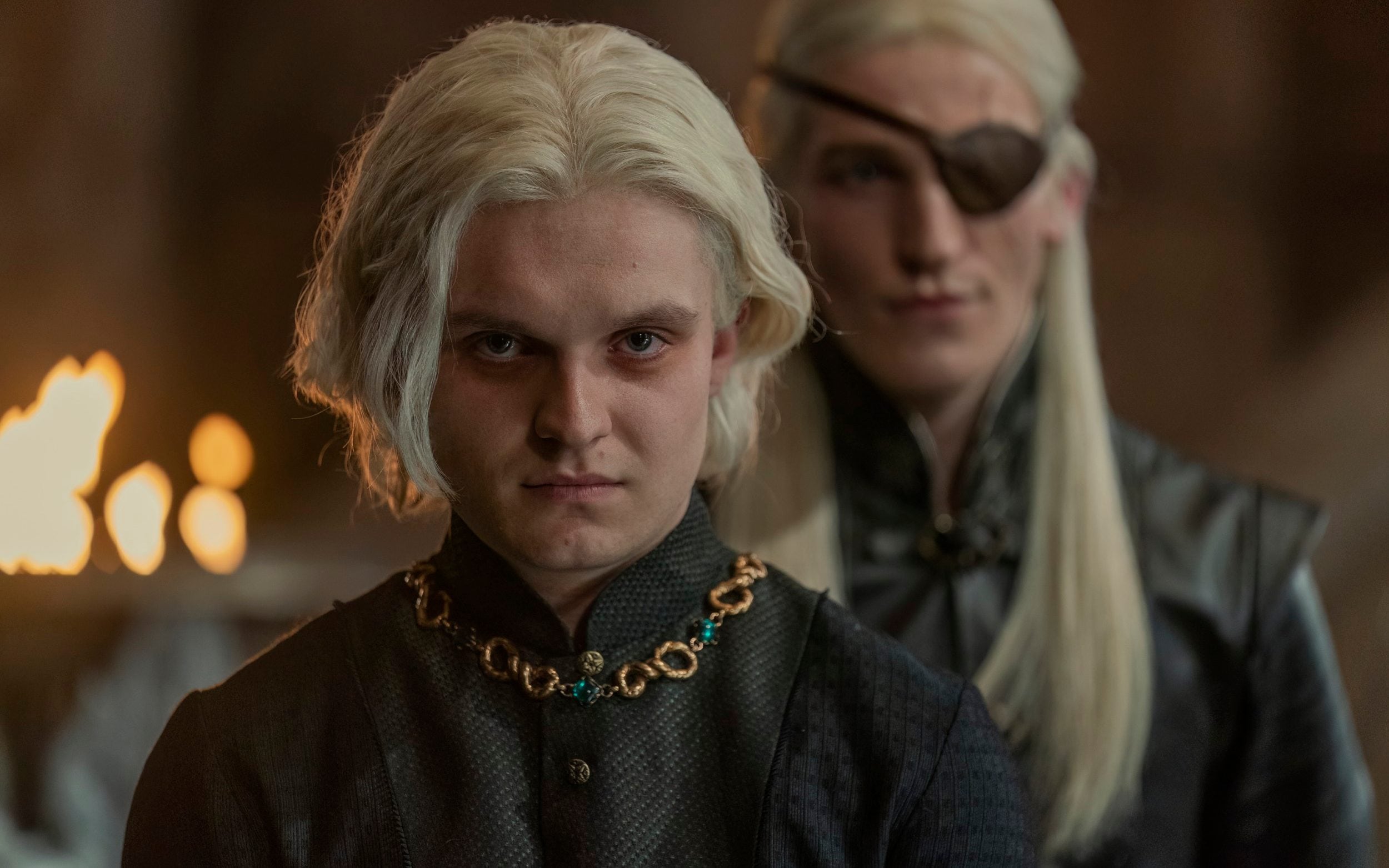 In response, Rhaenyra proposes a toast to her ex-best friend and stepmother, Alicent, in appreciation for the love and support she has offered Rhaenyra’s father. Despite Aegon’s nasty taunts, both Alicent and Jace retaliate in kind. Aemond, however, rises to raise his own toast to his nephews after Viserys has left, praising them as “handsome, wise…and strong.”

The provocateur clearly wants a cause to combat Jacaerys or Lucerys, and the allusion to their ancestry is blatant but easily denied.   Aemond gives up the fight for the time being after Daemon steps in between them.

Later that day, a hallucinating Viserys discusses the Song of Ice and Fire prophecy with his wife, but she misinterprets his words in a way that may become significant as a masked figure race to Mysaria (Sonoya Mizuno) to report all these happenings. Both Aegon the Conqueror and Aegon Targaryen, better known as Jon Snow, are mentioned by Viserys, the “prince who was promised.” 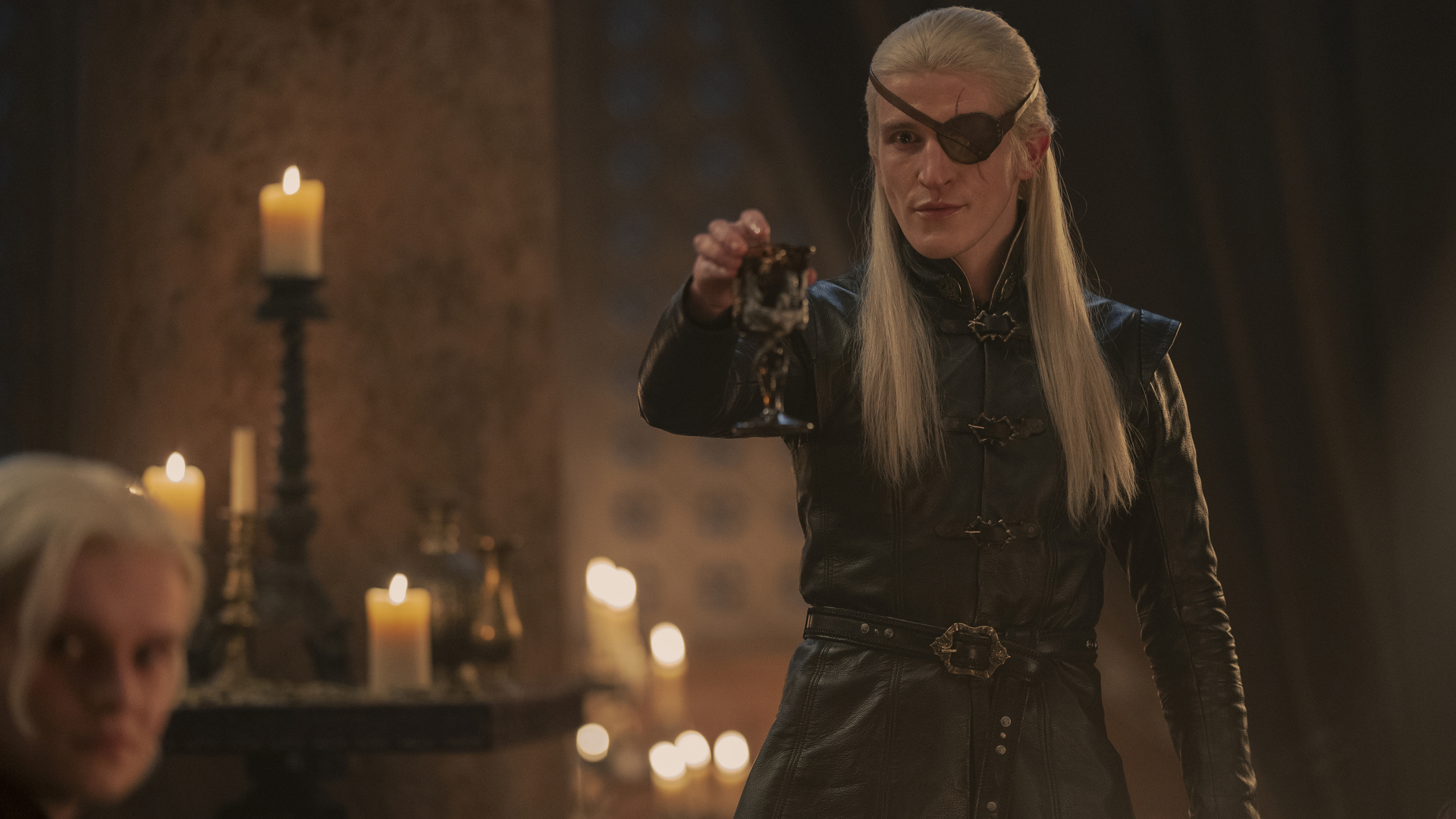 She assumes he’s referring to their spoiled rapist of a kid, Aegon. Her seven-pointed star is on the rise after Viserys’s death, and this may give her extra incentive to look out for her own sons’ interests. It’s seeming increasingly doubtful that the peace agreement between Rhaenyra and Alicent will hold as we enter the season’s last two episodes.

Read More: The Ghost Movie Review: The Action Flick Starring Nagarjuna is Impressive But Falls Short of its Potential!

This episode is smart, well-written, and character-driven, and it moves the program along in time without sacrificing any of the stories. Excellent work all around from Emma D’Arcy and Olivia Cooke, who let you feel the loss of their friendship without watering down their individual motivations.