Sandler’s performance as the frantic Sugarman, who is trying to make something of his newest recruit, Bo Cruz (Juancho Hernández), makes the picture feel even more real. Is Hustle, however, based on a true story?

Is Hustle Based on a True Story?

Even though there are literally thousands of sports cameos throughout the film, Stanley Sugarman and Bo Cruz’s narrative is completely made up. However, the film’s authenticity can be attributed to a number of factors, including the fact that its director, Jeremiah Zagar, and screenwriter, Will Fetters, are both from Philadelphia. 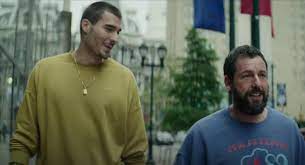 On the red carpet for the film’s premiere, Sandler remarked on Zagar’s ambition for the film, “He wanted to make it as Philadelphia as possible.” (This included employing current 76ers player Tobias Harris and the team’s head coach Doc Rivers in the video, as well as filming in South Philadelphia, Center City, and the Italian Market, among others.) Several sequences of the film were also filmed at the Wells Fargo Center, where the actual 76ers play.

When you see your shot, take it.

Sandler, whose passion for basketball is well-documented, evidently desired to create as realistic a film as possible; while the plot is not based on reality, many of the film’s aspects are.

Also Read: What Happened To Mike The Mouse in Animated Movie Sing 2?

Who Stars in The Hustle Cast?

You can check out the central cast and their respective roles below: