Gallagher was an American comedian. He was one of the most famous comedians of the 1980s because of his prop and observational act, which included smashing a watermelon with a sledgehammer on stage. He played between 100 and 200 shows a year for more than 30 years, smashing tens of thousands of melons with his “Sledge-O-Matic” sledgehammer. 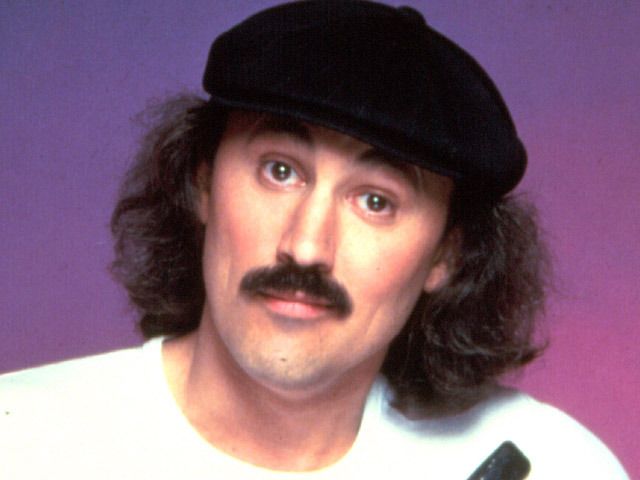 Leo Anthony Gallagher Jr., who goes by the name Gallagher, was born on July 24, 1946, in Fort Bragg, North Carolina, to a family with Irish and Croatian roots. He lived in Lorain, Ohio, until he was nine years old, but his asthma forced his family to move to South Tampa, Florida, where he went to H.B. Plant High School. He then went on to get a degree in chemical engineering from the University of South Florida in 1970. He only took English literature as a minor.

What was Gallagher’s Net Worth at The Time of His Death? 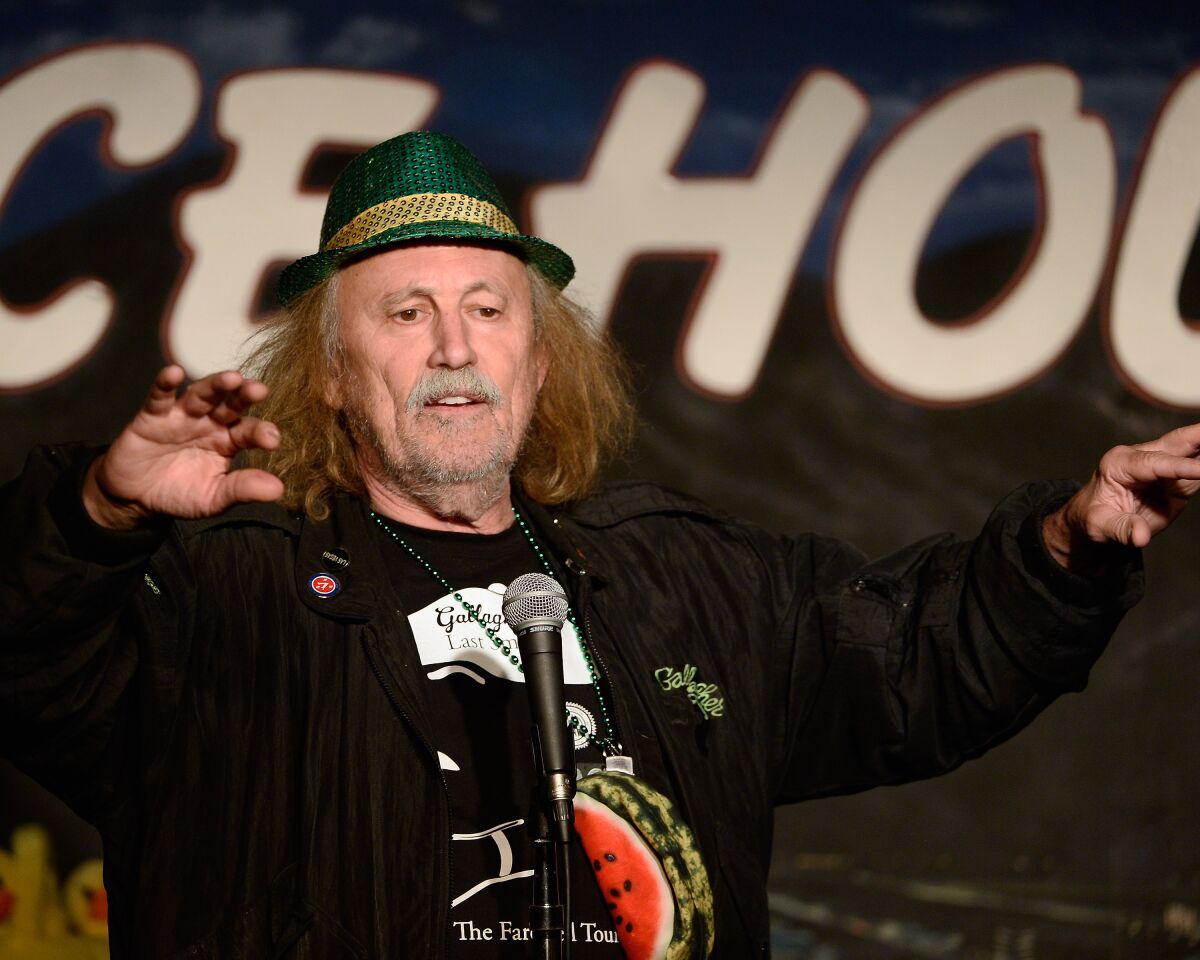 As of November 2022, Gallagher Had an Estimated Net Worth of $200 Thousand (Source: Celebrity Net Worth). Gallagher acquired all of his wealth from the Forteen Comedy Shows that the Showtime Cable TV Network aired.

People remember Gallagher as one of the best American comedians of the 1980s. Even though he only did 14 Comedy Specials for Showtime, every one of them has been shown many times, especially on Comedy Central. 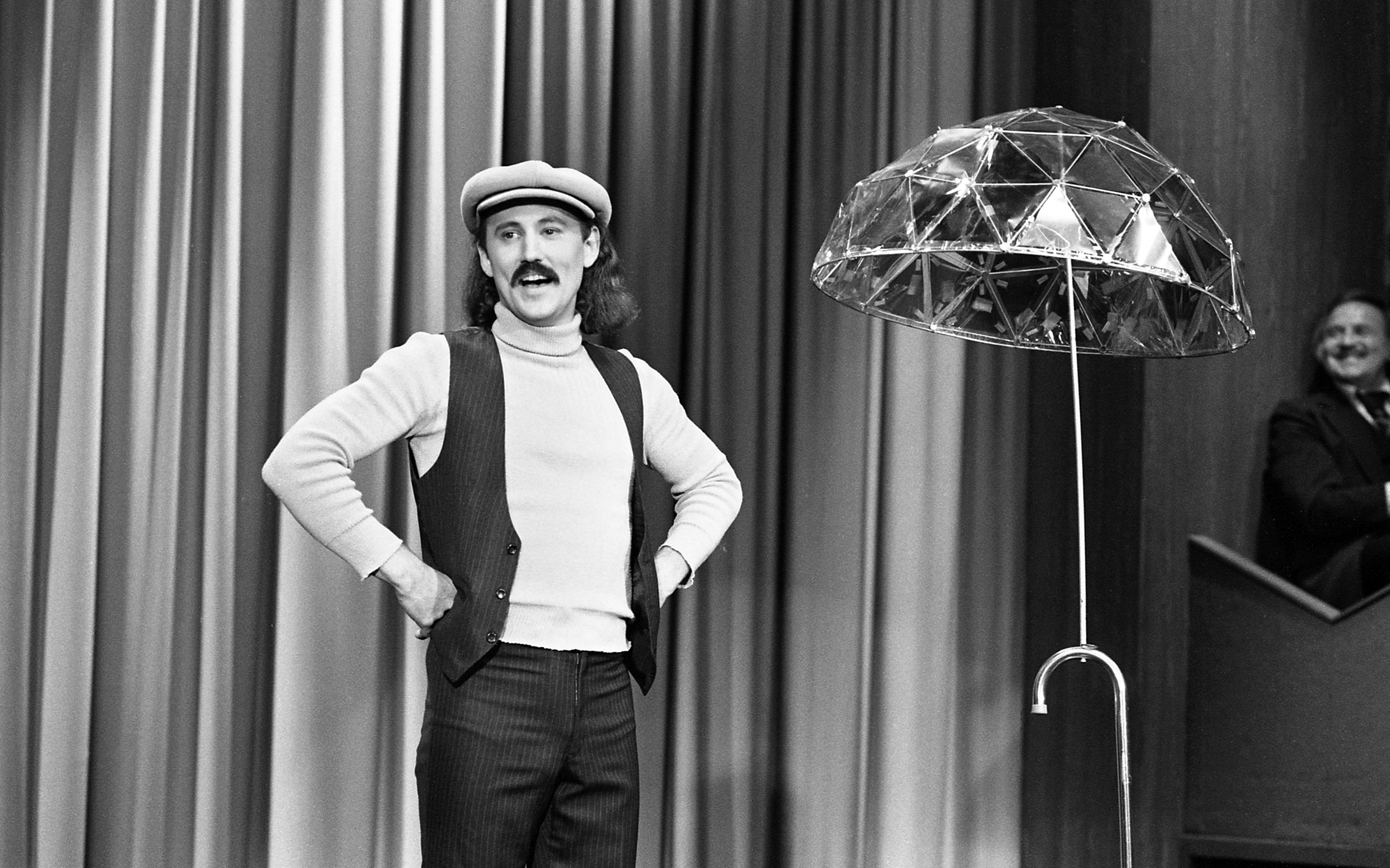 Gallagher got a job as Jim Stafford’s road manager after he graduated from college. In 1969, Stafford and Gallagher went to California. While there, Gallagher decided to do his own show. While going to both The Comedy Store and The Ice House, he started to work on his own comedy act. Even though Johnny Carson didn’t like prop comedy, he appeared twice on The Tonight Show when he was in charge.

On December 5, 1975, he was on the show to show off his prop, “The Tonight Show Home Game.” He was on again on May 9, 1979. He also performed several times on the show when guest hosts were filling in for Carson. Gallagher also went on The Mike Douglas Show and The Merv Griffin Show. He went to Playboy Clubs more than once.

“An Uncensored Evening,” Gallagher’s first comedy special, was the first stand-up comedy special ever shown on cable TV. Gallagher stayed a touring comedian for the most part, unlike other popular stand-up comedians of the time who moved on to sitcoms and movies. He once said that he did “200 shows a year for 35 years.” According to Variety, he did more than 3,500 live shows during his career.

Gallagher got 5,466 votes and came in 16th out of 135 candidates in the 2003 California recall election for governor. He ran as an independent.

How Gallagher Became a Renowned Face in The Entertainment Industry? 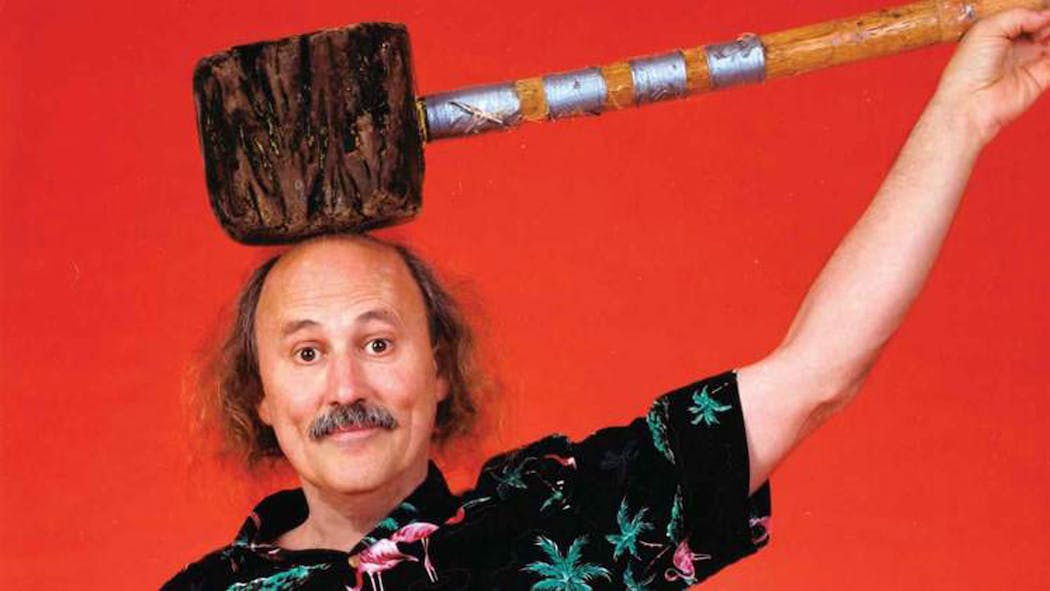 Gallagher’s signature sketch was a pitch for the “Sledge-O-Matic,” a big wooden mallet that he used to smash food and other things, ending with a watermelon. Gallagher called the front row of his show “Death Row” because it was close to where watermelon spray was being thrown. His show also had a lot of different props, like a big trampoline that looked like a couch.

The Sledge-O-Matic act is an example of physical prop comedy. The act itself (and even its name) was a parody of ads for the Ronco Veg-O-Matic, a kitchen tool that was heavily advertised on U.S. television from the mid-1960s to the 1970s. Gallagher also played with words in his act to show how strange the English language is.

Gallagher was in a TV commercial for GEICO Insurance in July 2012, where he did his Sledge-O-Matic routine again.

Even though he had serious heart problems in his 60s and early 70s, Gallagher kept touring until the COVID-19 pandemic mostly forced him to stop in the early 2020s. 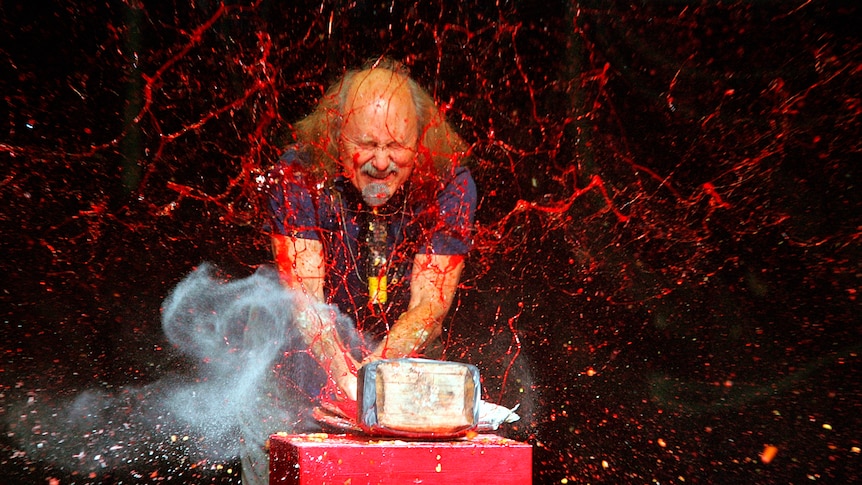 Gallagher would usually end each of his shows with his signature “Sledge-O-Matic” routine, but the way he did it changed from show to show.

It usually started with the following words:

“Ladies and gentlemen! I didn’t come here just to make you laugh tonight. I came here to sell you something and I want you to pay particular attention!

Who has been given a job by the amazing Master Tool Corporation, a division of Fly-By-Night Industries? Me! To show you! The coolest and most useful tool you’ve ever seen for the kitchen. Do you not want to know how it works?

So, you start by taking out an ordinary apple. You put the apple in between the pans that have been patented. Then you grab a tool that is neither a slicer nor a dicer nor a chopper in a hopper. What the heck could it be?! The Automatic Sledge!”

Gallagher would then pull out a big mallet, usually made of wood and about the size of a sledgehammer, and hit the apples with it, sending pieces of fruit flying into the crowd. People in the first few rows usually had tarps and raincoats, and many comedy clubs went to great lengths to cover and protect their interiors with tarps and plastic sheeting.

In 2004, Comedy Central ranked Gallagher as the 100th best stand-up comedian of all time. 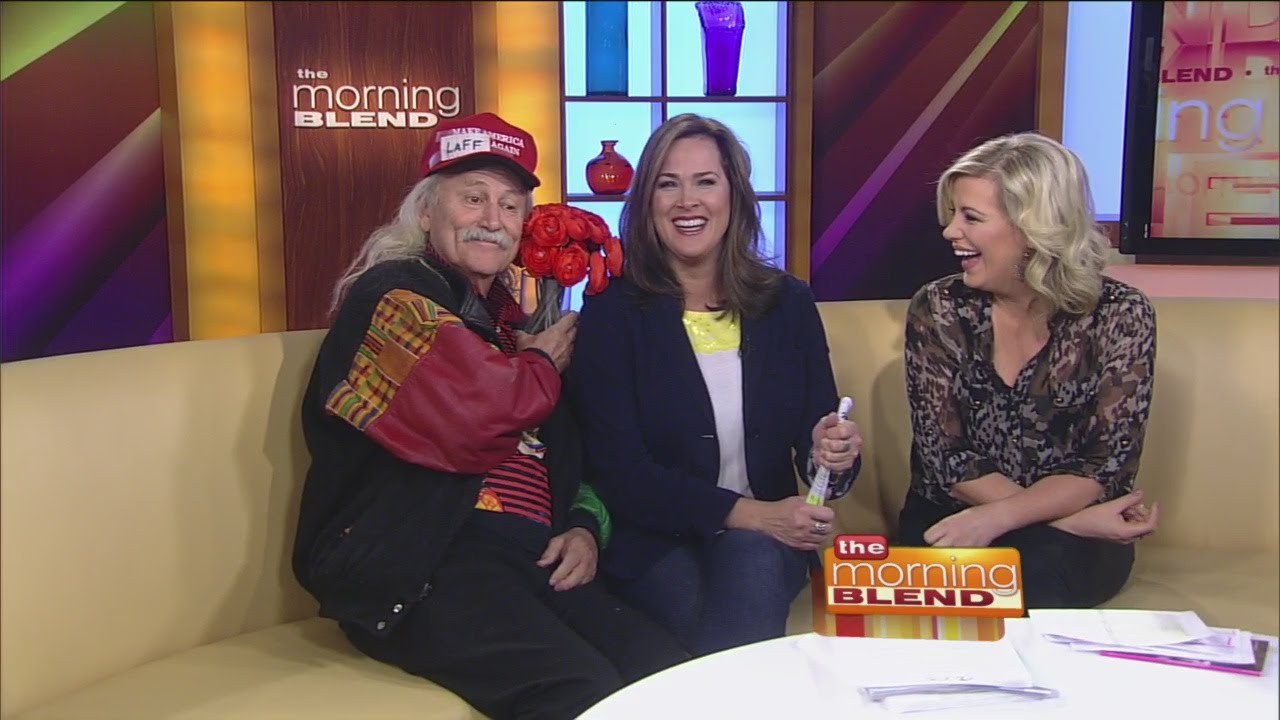 Gallagher’s two relationships resulted in the birth of two children one of which is a daughter named Aimee Gallagher. However, Gallagher never made public the names of his partners.

Gallagher said that he had gambled away almost all of his money on the stock market and was now “Broke.” But his longtime manager said this was a funny exaggeration and that everyone should be as broke as Leo.

Gallagher fell down on stage and grabbed his chest during a show on March 10, 2011, in Rochester, Minnesota. He was taken to Saint Marys Hospital right away, where doctors found that he had had a Small Heart Attack.

A year later, on March 14, 2012, right before a show in Lewisville, Texas, Gallagher started having severe chest pains. Gallagher’s manager said that the comedian had a “Mild To Serious” Heart Attack and was put into a coma so that doctors could figure out what was wrong with his heart.

Doctors slowly brought him out of the coma on March 18, 2012, after they put in two new stents in his heart. He got better quickly and began talking to his family. His manager, Christine Sherrer, said that he was moving, breathing, and making jokes on his own.

Gallagher died on November 11, 2022, in a hospice in Palm Springs, California. He had lost function in many of his organs. He was 76 at the time of his death.

What Made a Fight Between Gallagher and His Brother? In the early 1990s, Gallagher’s younger brother Ron asked him if he could use Gallagher’s famous Sledge-O-Matic routine in his own shows. Leo said it was okay as long as Ron, who looked a lot like Leo, and his manager made it clear in the advertising that it was Ron Gallagher, not Leo Gallagher, who was performing. Ron usually played in places that were smaller than the ones where Leo Gallagher played.

Ron started promoting his act as Gallagher Too or Gallagher Two after a few years. Ron’s act was sometimes advertised in a way that didn’t make it clear that he wasn’t the original Gallagher. This, along with Ron’s problems outside of the show, hurt Leo’s reputation.

Leo’s first response was to ask his brother to stop doing the Sledge-O-Matic trick. Ron still kept touring as Gallagher Too with the same routine. Leo sued his brother in August 2000 for trademark infringement and false advertising. In the end, the courts sided with Leo and told Ron he couldn’t do any act that made him look like his brother in small clubs and venues. This order also said that Ron couldn’t try to look like Leo on purpose.