Sitharaman concluded her visit to the Baramati constituency by holding a press conference in Pune, where she stated that efforts were being made to keep inflation within the target zone of 6%.

Nirmala Sitharaman, India’s finance minister, said on Saturday that the rupee has “held back very well” versus the US dollar, adding that the “RBI and ministry are keeping a very careful watch on this.” This past Friday, the Indian Rupee touched a new all-time low of 81.2250 U.S. dollars.

Sitharaman said at a press conference in Pune that the government is working to keep inflation within the 4%-6% range that it has set for itself.

The government’s allowance of edible oil imports and the opening of imports of pulses had helped to keep the rise in the price of these necessities to a minimum during the past month, the FM reported.

The minister said that the Maharashtra Vikas Aghadi (MVA) government should first explain why they halted or canceled projects like Asia’s largest Nanar oil refinery in Ratnagiri, the Rs 65,000-crore Wadhawan Port in Palghar district, the Ahmedabad-Mumbai bullet train, and the Mumbai Metro car shed in response to a question about the relocation of the Vedanta Foxconn semiconductor project to Gujarat. 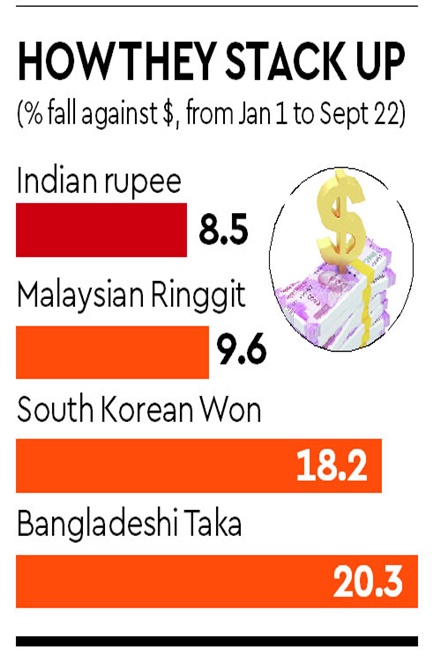 The finance minister stated that those responsible for the delay and failure to execute the Mumbai Metro Phase III project on time should be held accountable, rather than complaining about one project that did not come to Maharashtra.